A Landmark Decision for Patient Safety and Our Role In It 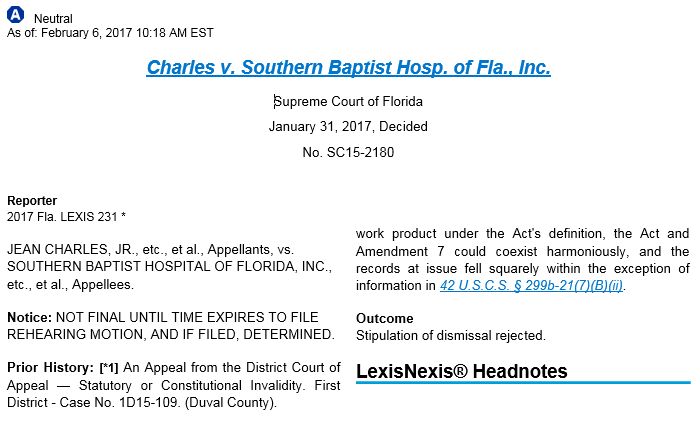 A week ago, the Florida Supreme Court decided Charles v. Baptist, a medical malpractice case filed by my Father in Duval County (Jacksonville). As is often the case, the result is rightfully credited to an army of skilled lawyers – most of them fronting their time and their money on behalf of a relatively powerless and cash strapped family against the most powerful corporate interests in the State. The result of this work will protect health care consumers and patients for generations. The Charles opinion is a thirty page tour de force: a frontal attack on the opaque and secretive world of medical peer review, adverse medical events and “sentinel events” – that I write about on this blog every day.

But make no mistake. The case and everything that happened in it – including the army of expert physicians and hospital administrators who testified – were the result of my Father’s work. I was honored to help lay the groundwork.

I remained involved in the Charles case after my Father’s passing two years ago and was professionally humbled by the efforts of our appellate counsel, particularly Bryan Gowdy. The appellate work Mr. Gowdy and others poured into Charles will undo extensive damage done to Florida’s Constitution when the First District Court of Appeals overturned our success in the trial court almost three years ago. Charles is a victory for Florida’s Constitution. It is a victory for State law over Federal Preemption. It is a victory for transparency over secrecy. A victory for patient safety over powerful special interests. But mostly, it is a victory for health care consumers. This landmark decision will stand as a monument to the rule of law and patient safety as long as there are lawyers and judges like my Father and Bryan Gowdy left to champion their cause. This is not the kind of victory won by television lawyers or ‘ambulance chasers’. This is the work of the best that our profession has to offer. The work cannot be summarized in a single blog post. It is, in essence, the culmination of a lifetime of work. Notably, my Father’s work. Over the next few weeks, I will be writing about the opinion, its significance and sharing stories about the kind of lawyer my Father was and how he inspires me today.

But as with all such cases – the story begins in tragedy. Marie Charles was admitted to Baptist Hospital suffering from iron deficiency anemia (IDA) and thrombocytosis which is an elevated blood platelet count. From her admission on February 12, 2010 until February 17, 2010, the Complaint alleged that her thrombocytosis became critical and the blood platelet count continued to increase until it exceeded 1,100,000 K/Microl. The Complaint alleged that she was taken to surgery by the Defendants even though her critical condition from IDA and thrombocytosis contraindicated surgery. During this unnecessary and contraindicated surgery, the Complaint alleges that Mrs. Charles suffered a catastrophic neurologic insult resulting in an excessive period of hypertension and hypoxia. This created the formation of a clot or thrombocytosis in the left ascending internal carotid artery (ICA) and the left middle cerebral artery (MCA) and thereafter was left untreated and medically abandoned for over three hours. The subsequent neurological insults left her permanently and totally incapacitated.

The Charles appeal resulted from an order of the trial court judge that Florida’s Constitution, particularly Amendment 7, required Baptist to maintain and divulge information about adverse medical events. Baptist refused to produce this Constitutionally required information, arguing that a Federal law preempted the State Constitution.

By way of background, we should review the subject of Amendment 7 – which we have covered on this blog before.

Article X, Section 22 of the Florida Constitution provides a guarantee of accountability and transparency of mistakes and adverse events so consumers can be well informed. The Amendment recognized consumers’ right to know about adverse medical events occurring in Hospitals as compiled by Florida’s Agency for Health Care Administration.

The Florida Hospital Association immediately sued to block implementation of Amendment 7. See, Case Number 04-CA-002670. Though unsuccessful, the hospital and insurance lobbies were used to getting their way and soon found another way to block Florida consumers’ rights. They simply approached the Federal legislature to pass a law contradicting the Florida Constitution so that they could prevent the implementation of Amendment 7 using the legal doctrine of “Federal Preemption”. Ironically, many of those seeking this special Federal protection call themselves “Federalists” who normally claim to oppose Federal laws infringing on States Rights (except when it is convenient or profitable for them to ignore this principle).

Knowledge of the law, understanding the forces arrayed against you and executing a strategy for a successful claim are all separate skills that are required for good representation. Before hiring counsel for any significant case, make sure that your lawyer is experienced in exposing Hospital liability, even in the face of Federal legislation designed to crush or diminish your rights. Your case will rise or fall depending upon your lawyer’s experience, knowledge, judgment and skill.